I have been incredibly busy lately, as you can imagine! I apologize for my lack of posting. I’m going to rewind a bit to go over some of the new things I have experienced.

About two weeks ago, my program at Maastricht University (called the Center for European Studies, CES for short), took all of us American exchange students on a fully paid trip to Berlin, Germany. We left in style aboard a giant luxurious bus (not the most environmentally friendly, but it sure was comfy), and drove for 9 hours to get there. It really shouldn’t have taken that long, but we made a few stops along the way at some German rest stops. I had to PAY to use the bathroom! Apparently that is normal here. There are turn styles to get in and everything. We arrived late on a Tuesday night, around midnight, so my friend Elisa and my roommate for the trip, and I went to bed soon after we arrived.

Processed with VSCOcam with p5 preset

Wednesday morning we woke up early to get breakfast at the hostel we were staying at. It was a buffet of bread, jam, and salami…not exactly my favorites, but apparently very German! We then went on a three hour walking tour of Berlin. It was extremely informative and I learned a lot–our tour guide was from Ireland, and he made it really fun! We started at the Brandenberg Gate, went to the Memorial for the Murdered Jews of Europe, the parking lot above Hitler’s bunker that he committed suicide in, the old Nazi Air Force headquarters building, the Berlin Wall, Checkpoint Charlie, The Deutscher Dom and the French Dom, and ending with Museum Island and the Berliner Dom. Our tour guide ended with saying that Berliners like to say that they are *a bunch of crazy long German words* which translates to: “Poor but sexy.” We saw a lot! Also…it was probably about 10 degrees out. It was absolutely FREEZING! 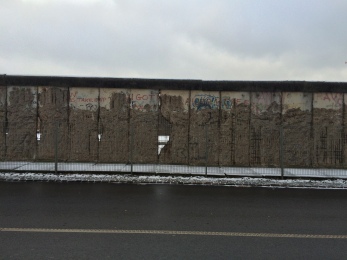 From there, we split up and went to lunch at a yummy pasta place in Hackescher Markt, where we met up with a friend from Clark studying in Berlin for the semester!

A few friends and I then ventured up to the top (well, as close to the top as we could get) of the Berliner Dom. There were some beautiful views up there…if you count giant construction cranes and industrial looking apartment complexes. The architecture in Berlin isn’t the most appealing, but it gives the city some character! We used the public bus (YEAH WOW I used public transit and didn’t die! Again!) to get to the Bundestag, the equivalent of the German capitol building. We got a tour of this building, which is an architectural wonder in itself! The tour ended with going up to the glass dome at the top of the building with a spectacular view of the Berlin skyline at night.

Processed with VSCOcam with g3 preset 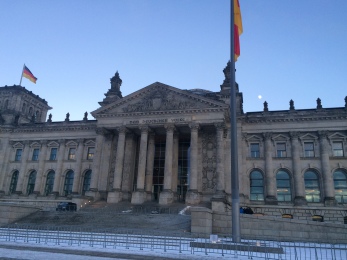 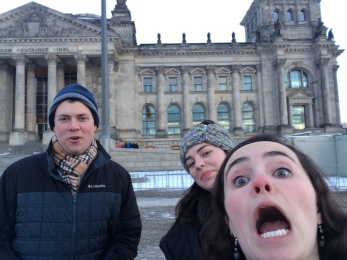 Thursday morning, our program took us to a tour of the Stasi Prison of East Berlin. The Nazi regime had thousands of regular citizens working as spies for them, and this is where the people went after a spy had figured something out about them that went against Nazi beliefs. It was a very creepy place, the rooms were unbelievably small and without windows. We were also shown the interrogation rooms, where prisoners had to go every night for hours until they made a confession, whether it was true or false. 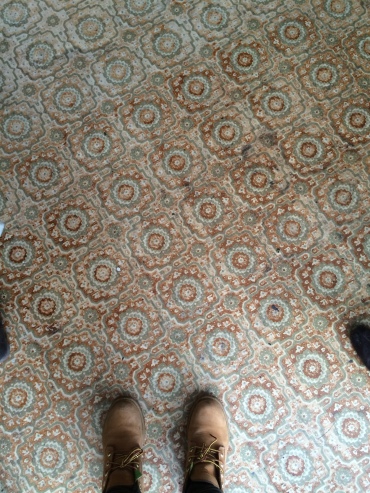 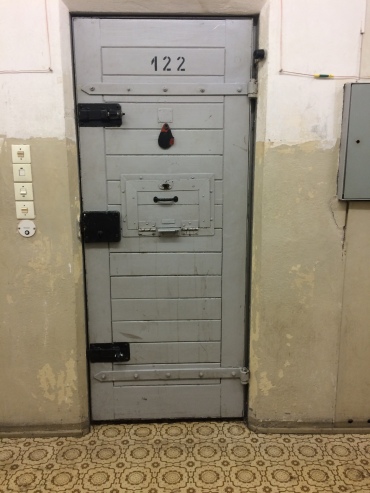 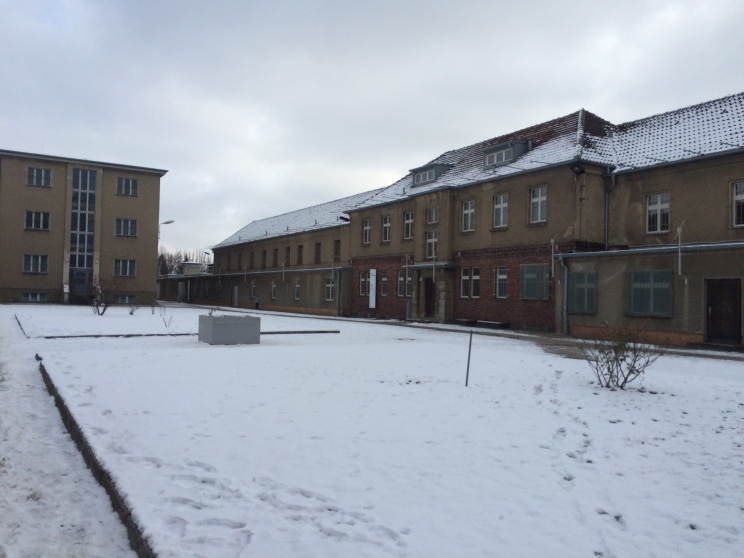 The bus took us to Hackescher Markt again for lunch, and my friends and I found the best lunch place ever, called Dean & David! They had all kinds of yummy organic foods, and I had the most delicious chai latte I’ve ever had. In Europe, they don’t seem to use ice very much, so when I asked for my chai latte to be iced, the waiter was very confused. For the afternoon, our group was to be split up according to what we’re studying while in Maastricht. I am in the European History, Culture and Arts program, so I went to Museum Island with my friend Nina from Clark. We went through the Pergamon Museum, full of artifacts from ancient Rome, the Middle East, and Egypt. There were some really impressive displays!

Processed with VSCOcam with a6 preset 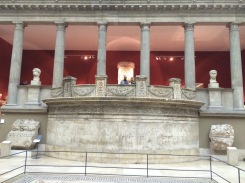 My whole life I have been fascinated with World War II and how something so oppressive could have actually happened. I have read countless books and watched many documentaries about this time period. For this reason, I was really (I hate to use the word excited in this situation) interested to see the place that my program took us to on Friday morning–Sachsenhausen Concentration Camp.

It was a very cold morning, probably about 20 degrees out. I had on three layers, a hat and gloves, and I was still cold. We started the tour looking out onto the expanse of the camp from the lookout point of the officers. Words cannot describe how eerie this was, knowing the kind of people that had once stood in this same spot, and looked out across the camp, seeing scarily thin men with tatters of clothes, snow on the ground and thinking, “Good, this is exactly what should be happening right now.” We entered the camp through the gate reading “ARBEIT MACHT FREI,” work makes you free. Walking around the camp felt utterly surreal, I just could not wrap my head around the fact that I was actually there and walking where prisoners walked not even 80 years ago. I couldn’t imagine how cold they must have been during the winter months. We saw a barracks where the prisoners slept, a “bathroom” (it did not look like a bathroom at all), gas chambers, and crematoriums. I will never forget that morning. 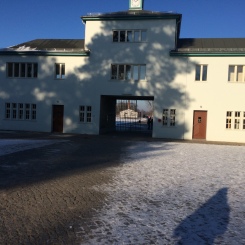 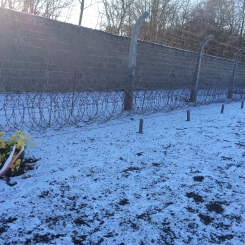 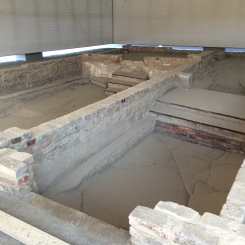 We had lunch in Alexanderplatz at a burrito place (finally Mexican food!), then walked around for a while. We went to Fassbender and Rausch, an amazing chocolate place-they had 5 foot tall chocolate sculptures of famous buildings around Berlin! After this, we continued to maneuver around on the Berlin train system, which was hard to figure out at first but we got the hang of it! Topography of Terror was the next museum on our list, which was a museum full of pictures of what life in Germany and around Europe was like during the first half of the twentieth century, and I was geeking out the whole time. For dinner, our program took us all out to dinner at a classic German restaurant, the Hofbrauhaus Berlin. It was a huge dining hall complete with live German music (they sang Sweet Caroline, though!), wait staff in German outfits, and TONS of beer. When I say tons, I mean SOOOO MUCH. I got a baked potato plate with lots of vegetables and it was really delicious, I was proud of myself for finding something that I could actually enjoy eating (I am a very picky eater).

These are some of my friends on my trip! Left to right: Elisa, Degen, Nina, Mary-Brent, Chris, Amanda, me! 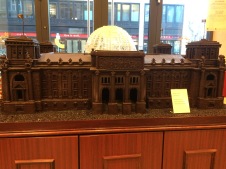 Saturday morning was relaxed, my friends Amanda and Chris (they go to Washington University in St. Louis) and I went to the East Side Gallery, the largest portion of the Berlin Wall that is still intact (1.4 km long). Berliners love their graffiti, and this wall was no exception. However, the graffiti in Berlin seemed to be a lot more thought-provoking than the bubble letters of graffiti in the US. It was snowing when we were walking around and it was so picturesque. It’s hard to believe how big a role these slabs of cement played in the history of Berlin, and Germany as a whole. 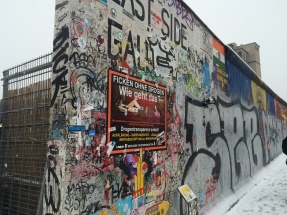 We went to a little coffee shop after walking around a bit, then explored around some more until our bus back to Maastricht left at 1 (or 13:00 European time!). 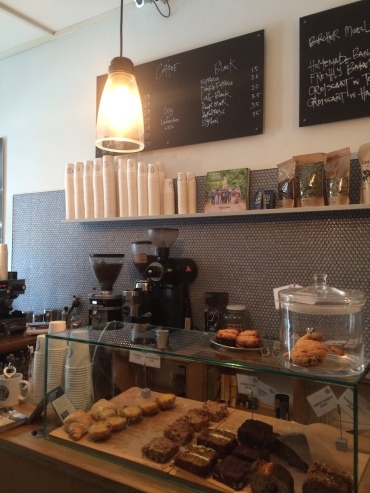 Berlin was a fantastic experience as a whole. It is a city unlike any other, with so much history, but very few old buildings because they were all destroyed at one point or another. It has a lot of personality, but very little charm. I highly recommend traveling here if you get the opportunity to, I enjoyed my time here and I hope to return someday! 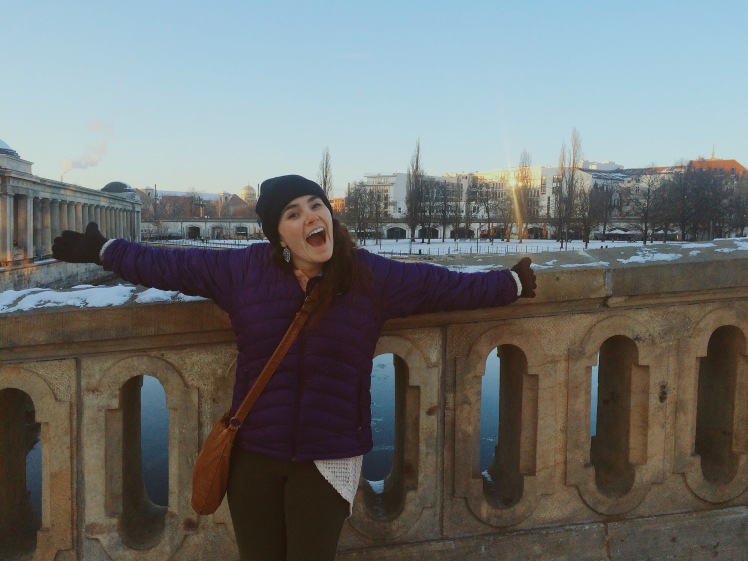 i’m maddie. welcome to my virtual mind, where i ramble about what’s been tumbling through my physical one lately – usually having to do with travel, environmentalism, and personal growth.

📍my happy place
felt inspired, shot a whole roll of film in one day! spring is heeeeere 🎞🪄 📸
hi winter 🧊❄️🌨☃️ i love u. i’m going to post more random pics without feeling an obligation to say something poetic in the caption. i just like this picture and it reminds me of a special walk during the blizzard last week. snow is so peaceful.